Decline of the Honey Bee

The reality of the important role the honey bee plays in our survival is delivered in the popular kids flick, Bee Movie. It is not just that the writer is telling a story but, as in many movies, there is a message being delivered. The problem is so severe in London that residents are encouraged to become bee keepers! Following is a portion of an interesting article I came across.

Bee populations are changing.
It's thought that there used to be 25 species of bumblebee in the UK, but now three are known to be extinct (Bombus cullumanus, B. pomorum and B. subterraneus).
Seven more species are listed on the Biodiversity Action Plan list as being in danger. 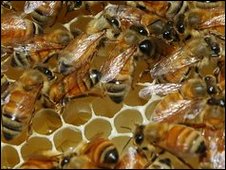 Honeybee numbers in the UK have fallen by up to 30% since 2007.
The 70% fall in Bumblebee numbers since the 1970s is largely attributed to the growth of industrial agricultural practices resulting in monocultures of crops, without suitable wildflower habitats for bees, and many other insects, to live on.
But some farmers are helping wildlife on their land and an increasing number of food products are now made from crops grown in a way that protects the countryside and provides food for bees.
Sadly, original wild honeybees (Apis mellifera mellifera) are now thought to be extinct in Britain, but literally millions of domestic strain honeybees are managed by beekeepers each year, which are familiar to all of us buzzing about parks and gardens.
Honeybees in Britain, however, are having a tough time and are increasingly affected by a range of problems including foulbrood; varroa mite; viral diseases and dysfunctional immune systems.
Colony collapse disorder, although widespread globally, does not yet seem to have arrived in the UK.
But just like bumblebees, honeybees are also suffering from the loss of widespread and varied foraging habitats, especially in the countryside.
The value of bees through pollination of crops is thought to be in the region of £1 billion a year and 35% of our own food crops are estimated to be directly dependent on honeybee pollination.
Bumblebees pollinate crops too, especially fruit like tomatoes and apples as well as other crops including oilseed rape and beans.
Some farmers even keep bumblebees in their greenhouses to pollinate crops that are grown all year round, and import southern European bumblebees raised in countries such as Slovakia and Holland.
The concern of conservationists is that this could potentially introduce further pest and disease risk to native British bumblebees.
Evidence in the US shows wild bumblebee numbers have collapsed since the 1990s - following the introduction of parasites carried by European species brought in to pollinate greenhouse crops such as tomatoes and peppers.
As well as decreasing numbers, there are also changes being observed where bumblebees live and how they behave.
The buff-tailed bumblebee (Bombus terrestris) for example has recently been recorded in flight in December and January along the south coast as far east as Ramsgate, as far north as Leicestershire and even North Wales.
This is really unusual, as typically only the queen bee overwinters in holes in the ground.
The suggestion is that global warming is affecting bee behaviour - which may, in turn, affect pollination, flowers, plant survival, fruit, crops and ultimately numerous species of wildlife...including us. -BBC London

Promote Your Page Too

Question of the Week